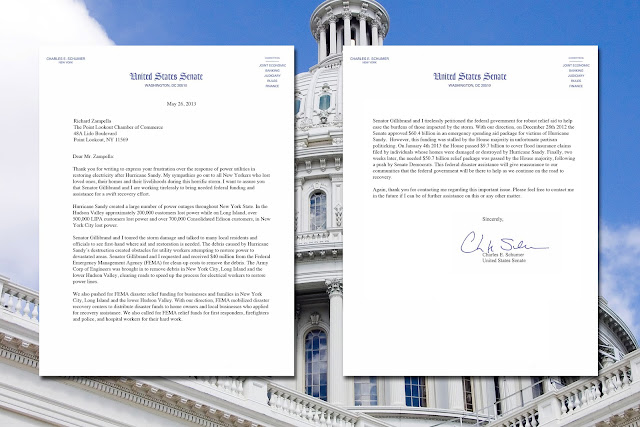 Thank you for writing to express your frustration over the response of power utilities in restoring electricity after Hurricane Sandy. My sympathies go out to all New Yorkers who lost loved ones, their homes and their livelihoods during this horrific storm. I want to assure you that Senator Gillibrand and I are working tirelessly to bring needed federal funding and assistance for a swift recovery effort.

Senator Gillibrand and I toured the storm damage and talked to many local residents and officials to see first-hand where aid and restoration is needed. The debris caused by Hurricane Sandy’s destruction created obstacles for utility workers attempting to restore power to devastated areas. Senator Gillibrand and I requested and received $40 million from the Federal Emergency Management Agency (FEMA) for clean-up costs to remove the debris. The Army Corp of Engineers was brought in to remove debris in New York City, Long Island and the lower Hudson Valley, clearing roads to speed up the process for electrical workers to restore power lines.

We also pushed for FEMA disaster relief funding for businesses and families in New York City, Long Island and the lower Hudson Valley. With our direction, FEMA mobilized disaster recovery centers to distribute disaster funds to home owners and local businesses who applied for recovery assistance. We also called for FEMA relief funds for first responders, firefighters and police, and hospital workers for their hard work.

Senator Gillibrand and I tirelessly petitioned the federal government for robust relief aid to help ease the burdens of those impacted by the storm. With our direction, on December 28th 2012 the Senate approved $60.4 billion in an emergency spending aid package for victims of Hurricane Sandy.  However, this funding was stalled by the House majority in unfortunate partisan politicking. On January 4th 2013 the House passed $9.7 billion to cover flood insurance claims filed by individuals whose homes were damaged or destroyed by Hurricane Sandy. Finally, two weeks later, the needed $50.7 billion relief package was passed by the House majority, following a push by Senate Democrats. This federal disaster assistance will give reassurance to our communities that the federal government will be there to help as we continue on the road to recovery.

Again, thank you for contacting me regarding this important issue. Please feel free to contact me in the future if I can be of further assistance on this or any other matter.