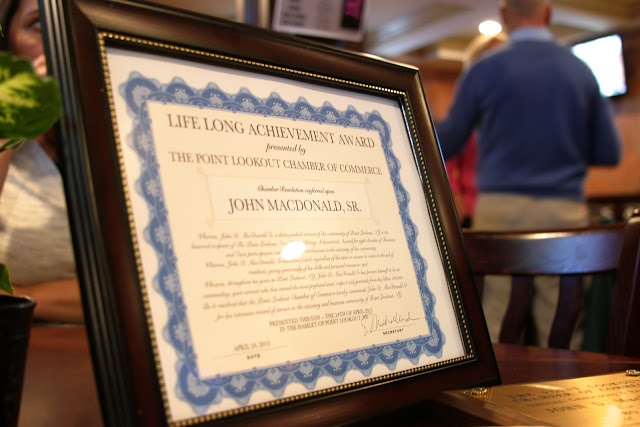 Chamber Resolution conferred upon
JOHN MACDONALD, SR.
Whereas, John D. MacDonald Sr, a distinguished servant of the community of Point Lookout,
NY is the honored recipient of The Point Lookout, New York Lifelong Achievement Award for
eight decades of Business and Civic participation with countless contributions to the citizenry of his
community.

Whereas, John D. MacDonald, Sr has never failed, regardless of the time or season to come to the
aid of residents, giving generously of his skills and personal resources; and

Whereas, throughout his years in Point Lookout, NY, John D. MacDonald Sr has proven
himself to be an outstanding, quiet servant who has earned the most profound trust, respect and
gratitude from his fellow citizens.

Be it resolved that the Point Lookout Chamber of Commerce hereby commends John D.
MacDonald Sr for his extensive record of service to the citizenry and business community of
Point Lookout, NY.


I had the opportunity to speak with our honoree tonight this past Saturday for about 2 hours. It was not long before it became obvious to me that he has a deep rooted love and affection for this community. His service and dedication to our business community for the last 8 decades is unmatched. He will say the there is no other community like Point Lookout, NY anywhere. He will say it is a rare and unique jewel remaining virtually untouched by the outside world.

If you have ever wondered how it is that our "Little Community by the Sea" has maintained it's charm and remains free of the urban sprawl of our surrounding areas, you would need to thank our honoree tonight. His selfless efforts and quiet service to this community has resulted in an improved quality life for all in Point Lookout.

He came here with his family in 1929, from Oceanside, NY via Salem, Massachusetts at the tender age of nine. At that time, there were approximately 43 families that lived in town year round. It was the height of the depression and he will tell you emphatically, "TIMES WERE TOUGH". The full time resident were all engaged in local commerce. The were the contractors and builder that physically built this town.

He will tell you that the family business had it's humble beginning with a "building boom" that occurred on Inwood Ave around 1935. For those of you that don't know, Inwood Avenue was only intended to be a temporary street at one time. The land beyond it was a series of dunes that ebbed and flowed with the tides.

Glenn Little, the local builder began building a series of 1 story brick homes that line Inwood Ave today. You could purchase one for $3,000. If you wanted an extra lot to go along with it, that would set you back an additional $500. This building boom, solidified the family business. For $240 per house, they installed the complete plumbing system.

Our honoree recalls how he cut the rumble seat of the back of the chassis of his Model A Ford & retrofitted it as a improvised pickup truck. He will also recall how he used to take that Model A out on the ice of Reynolds Channel when it froze over in the winter.

Commerce at that time in Point Lookout would have been comprised of builders such as Ralph Vale, Bill Helmer & Glenn Little. Lauders Restaurant was over by the Rescue House and would entertain the likes of Tom Dyer who was the first Postmaster in Point Lookout. He had been appointed by Teddy Roosevelt as a reward for his loyalty when they both Charged up San Juan Hill together in 1898.

Jimmy Quinto hauled Coal and Ice and had a single gas pump outside his shop on Lido Blvd. There was Stanley White's Luncheonette where Merolas stands. Mike and Eddies was a local bar where Gelos is located and of course Whities Oasis. There was Mauriortiy & Courtmeiers across the street and Gibbetts which is now the Fishermans Catch and Merlos Supermarket that was in the building next to where Skipperdees is today.

Yes Point Lookout was teeming with commerce, but there was also a tremendous sense of community and civic responsibility that when along with a growing population.

Our recipient tonight, in addition to being a successful entrepreneur and businessmen has been a quiet servant of this community for many years. He is a two time chief of the Point Lookout Volunteer Fire Company Inc. He will politely remind you not to confuse it with the current day Point Lookout Fire Department. It's first chief was Joe Scully and the 15 members moved the original engine room with Old Sam's Horses on block and tackle to it's current location that we know as Ye Ole Firehouse.

The community banded together and raised funds themselves by selling bonds and volunteering their work to build the all purpose hall and the east wing on the firehouse. The family business put in the plumbing.

This early group of local leaders and businessmen were never intimidated by the daunting initiatives that they tackled. There was a “Can Do!” spirit that motivated them. This group of merchants did not need to rely on local government for support. If they saw a need, they did it themselves.

Together they built a community center that saw grand evenings, theater productions, dinner dances, weddings and it was the meeting spot for both Churches before they had their own buildings. It was the heartbeat of the community and a monument to civic cooperation.

Our Honoree tonight erected the first public Christmas Tree in town on Lido Boulvevard. He will probably not tell you how much trouble he got into when he shorted out the family fuse box as a result. He would go on to organize the decoration of light on Lido Blvd each year with the local electrician.

Our Honoree tonight, helped form the first boy scout troop in Point Lookout along with Ludwig Meier. At the time Point Lookout was all sand and no trees. Troop 525, which met at the firehouse planted the trees that adorn town so they could all attend the International Boy Scout Jamboree that was held in Switzerland that year. If you appreciate the shade during the summer around town, you may want to thank tonights recipient.

Our Honoree tonight served for 17 years as the chairman of the Zoning Committee of the Civic Association & served for 20 years on it's Board of Directors. His tenure saw the elimination of two family housing which has maintained the character of the community to this day. He hung the first halyard on the top of the Coast Guard Station Flag Pole. He erected Point Lookout's first ice skating rink.

In the 1950's his father saw to it that the special parks district and beaches were protected for generations to come and in 1954 the beach and the parks were protected. In the 60's he served as a republican committeeman responsible for numerous legislative changes to protect the community including spearheading the purchase of the Vest Park Property that is adjacent to Merola's.

In the 70's he once again came to the assistance of his firehouse. When the Board of Fire Commissioners threatened demolition, he made sure violations in the building were corrected in order to ensure it's survival. He will ask you to reflect that no other community in Nassau County really has anything like it and even today it's very existence continues to be threatened by the Board of Fire Commissioners.

Today he continues to play an active role with local legislators. It is not unusual to see him leading an entourage of dignitaries through town with suggestions for community improvements.

It is with great pride that the Point Lookout Chamber of Commerce his friends and professional associates salute and celebrate Master Plumber John D. McDonald Sr. with this life long achievements award for his outstanding service and dedication to our business community and civic contributions to his beloved town of Point Lookout, NY.


-Richard Zampella
April 24, 2013
for The Point Lookout Chamber of Commerce

SMALL BUSINESS SATURDAY IS SCHEDULED FOR MAY 4, 2013 IN POINT LOOKOUT, NY 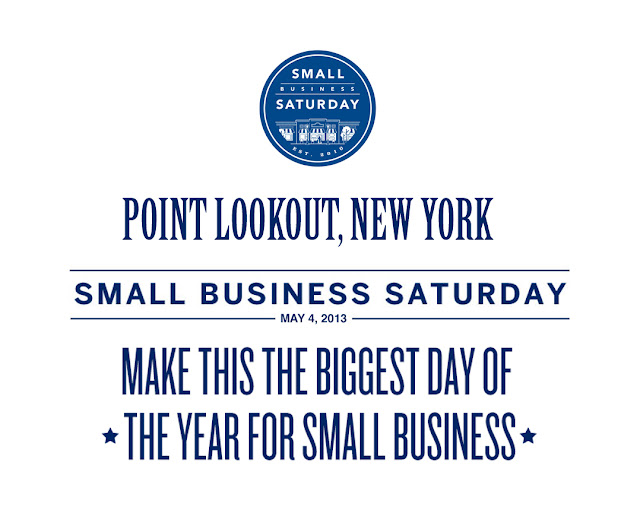 The Point Lookout Chamber of Commerce is sponsoring Small Business Saturday on May 4, 2013. Chamber Members are encouraged to participate by offering a promotional special to encourage residents to patronize businesses on this date. If you are interested in participating, contact Richard Zampella at news@pointlookoutcmmerce.com with the terms of you offer.

Member wishing to participate will have offers advertised and emailed from The Point Lookout Chamber of Commerce. This date will be an opportunity for residents to re-aquaint themselves with your business after the ravages of Hurricane Sandy. We strongly encourage all members to participate. Contact us right away.

http://www.pointlookoutcommerce.com/small_business_saturday.html
Posted by Point Lookout Chamber of Commerce at 10:30 AM No comments: 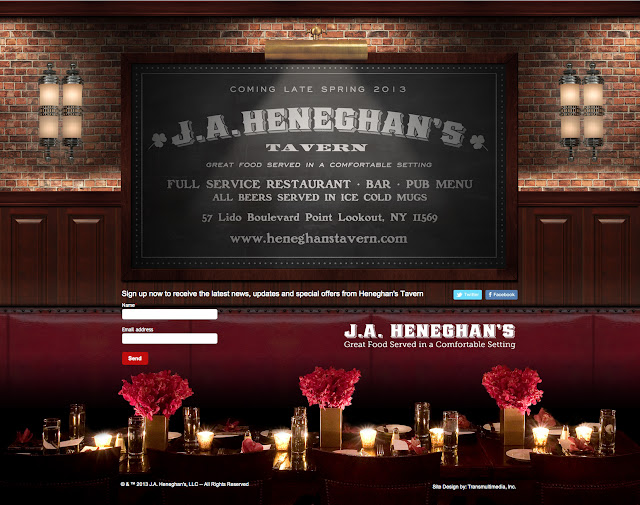 J.A. Heneghan's Tavern located at 57 Lido Blvd has launched a landing page at http://heneghanstavern.com. Visitors can register for the latest news, updates and special offers. Gift cards with be available for purchase soon.  In the coming weeks, a comprehensive website will be launched providing specific details about Point Lookout's newest Tavern & Restaurant.
Posted by Point Lookout Chamber of Commerce at 9:37 AM No comments:

Ribbon Cutting at The Ale House on Lido Boulvard 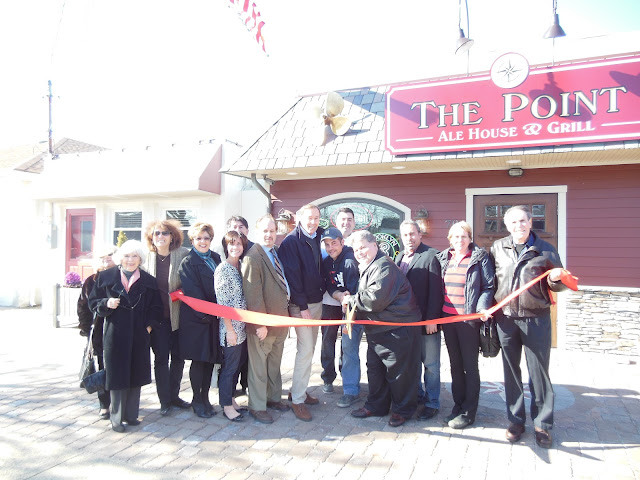 Pictured left to right are: 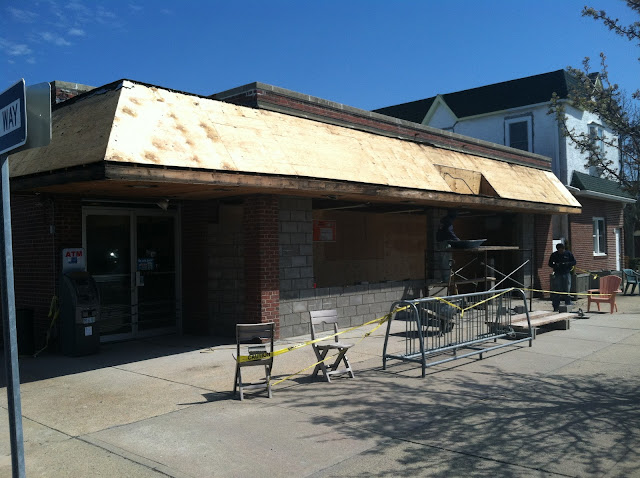 The Point Lookout Chamber of Commerce welcomes the arrival of a new produce market and specialty store on  Lido Boulevard in Point Lookout, NY. Work began this week on the old Merola's Market building. It is scheduled to open sometime in May and will be called Aggie Market & Kitchen